It's Day 2 of My Favorite Things December Release Countdown, and today
I've got a fun and colorful get well card using.....Band-Aids.

Whether you have an "owie" or not, you gotta love Band-Aids. I've heard that
people wear them, just because. Especially cute Hello Kitty ones! 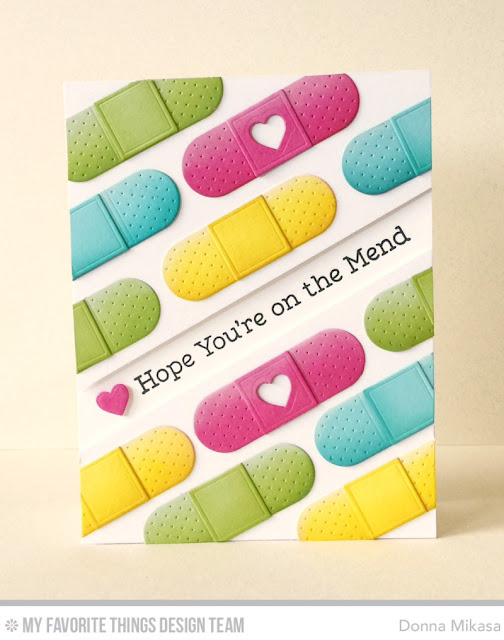 I first die cut a bunch of Band-Aids in assorted colors of card stock, together
with the square pad portion and adhered them together. Small hearts were
cut from the Razzle Berry Band-Aids and saved for later use.

I ink distressed the Band-Aids to give them a bit of dimension, and added
highlights with a white pigment ink pad. 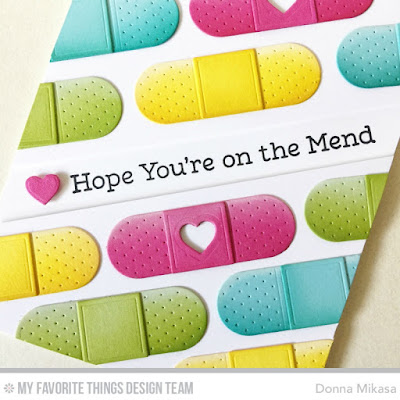 The Band-Aids were adhered diagonally on a panel, then cut apart,
leaving a space for the sentiment. Both halves were popped up on a
card base and the sentiment was stamped in the center. I finished off
the card with one of the pink hearts next to the sentiment.

Visit today's countdown post at My Favorite Things and don't forget to
leave a comment there for a chance to win $75 in prizes! Hope you'll
stop by tomorrow for the last day of the countdown!