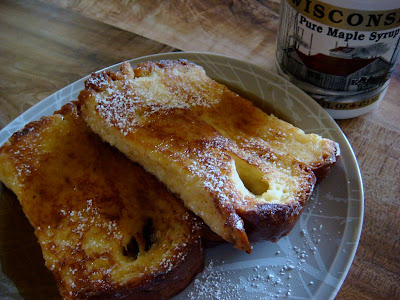 Traditionally, most Japanese households serve ozoni on New Year's morning. It's a broth filled with vegetables, together with mochi--glutinous rice cakes. As a child, I used to dread coming to the breakfast table and coming face to face with my bowl of ozoni. And my mother reminding me to "chew the mochi really well because a lot of children and old people choke on it." Great....a hazardous breakfast.
This year, instead of our usual pancakes, I served French toast made with thick slices of Portuguese sweet bread paired with REAL Wisconsin maple syrup. I even dusted it with a sprinkling of powdered sugar. And after trying the real stuff, I can't go back to Log Cabin or Mrs. Butterworth's ever again. 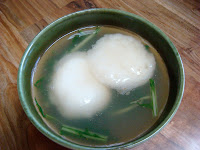 Yes, I did make a small pot of ozoni--because it's tradition--and we chewed it really well.
Happy New Year to all!
*Edited to note: I didn't mean to make light of the fact that people have choked on mochi and there are indeed reported cases of death. I apologize if I've offended anyone who experienced this firsthand.
Posted by donna mikasa at Friday, January 01, 2010