At Hiroshima, we visited the Peace Museum and I saw a display of tiny origami cranes. They were the actual cranes folded by Sadako Sasaki, a young girl who was a victim of the atomic bomb that was dropped over Hiroshima in 1945. She developed leukemia as a result of exposure to the radiation and her classmates folded a thousand cranes with the hope that she would be cured. 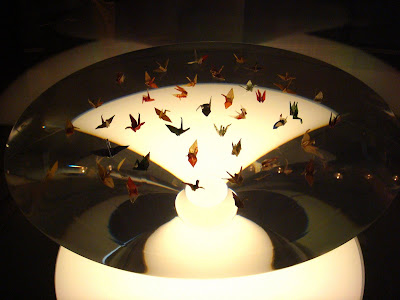 She continued to fold them even after the thousand were completed and used whatever type of paper she could find--cellophane, gum wrappers. I was humbled by how neatly they were folded and the fact that she created little works of art with what she had. Apologies for the dark photo but we weren't allowed to use flash in the museum. 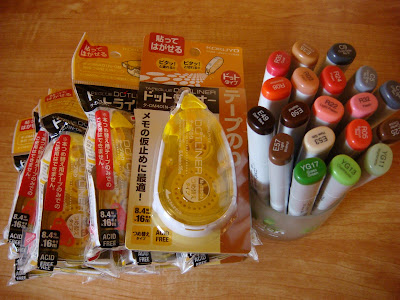 And for anyone who's interested, here's a shot of my Kokuyo stash--love the yellows!--and the 19 Copics that I got. I thought I bought a dozen but 19 is a nice number. I should have rounded it off to 20.
Posted by donna mikasa at Wednesday, October 14, 2009