The One Layer Wednesday challenge on Susan's blog is to create a one layer card with a piece of ribbon on it. And here's my card. 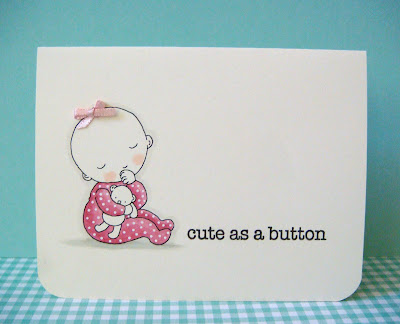 I used the Pure Innocence baby digi which looks like a little boy because it's bald, but just by adding a teeny pink bow, he became a she! I also chose to color just her jammies and give her a bit of blush. I'm loving these OLCs! 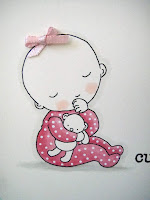 See the dots on her jammies? They were made with a Sharpie poster paint pen. Suzanne Dean first mentioned how much she liked this pen and now I'm a big fan, too.
I'll be giving away a pen to a random commenter sometime this weekend! Stay tuned....it might be you!

Thanks for your comments on yesterday's card and here's a close up of the clouds which were described as "marshmallowy"! After cutting out random cloud shapes, I simply edged the bottom portion with two Copics--C00 and W00. Can you see it?
Glad you liked them!
Thanks so much for visiting...
Hope you have an awesome weekend!
Posted by donna mikasa at Friday, May 14, 2010